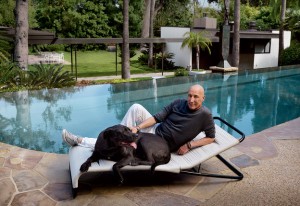 Sam Simon, co-creator of The Simpsons and an animal rights activist, was diagnosed with terminal cancer two years ago and is on a mission to advocate for and rescue animals with the time he has remaining.

“I’ve got sun bears, moon bears, grizzly bears, Syrian bears, brown bears,” Sam tells me as we approach the Wild Animal Sanctuary a few hours later. “I have 11 bears in Dallas and 23 in Colorado—but they just had six cubs.” There are also two rescued chimps at a sanctuary in Florida, a racehorse in Virginia, and some 500 chinchillas rescued from a chinchilla ranch in California. If all goes well, an elephant will soon join the roster.”