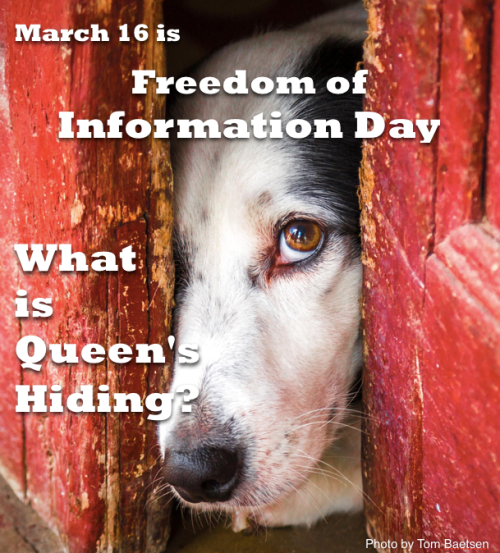 Over two years ago a member of Queen’s Animal Defence (and Queen’s faculty) submitted a freedom of information request concerning nonhuman animals used in research at Queen’s. Queen’s declined to release the information. An appeal was submitted, and we are still awaiting an arbitration decision from the Information and Privacy Commissioner’s Office. (The decision has been delayed three times.)

Queen’s is utterly secretive about research using animals. We don’t know the numbers and types of animals used; the purpose and types of experiments performed on them; the source and ultimate fate of the animals; or the results of any evaluation of the quality or utility of resulting research. In response to requests for information, or justification of research, Queen’s invariably repeats the same mantra: it complies with the guidelines of the Canadian Council on Animal Care (CCAC). The CCAC is a quasi-administrative body governed by animal research interests which establishes guidelines for animal use. The Canadian Federation of Humane Societies is the only advocate for animals on the CCAC – one voice out of 22 member organizations.  In other words, the biomedical research industry makes its own rules, behind closed doors. (See this recent post for a more detailed critique of the CCAC.)

We should know by now never to entrust the care of vulnerable beings to powerful organizations acting without public scrutiny. Consider residential schools. Or the sex abuse long tolerated and covered up by the Catholic Church. Or the non-consensual surgeries, experiments and other abuses inflicted on people with disabilities and mental illness in residential institutions. These aren’t cases of a few bad apples run amok – a priest, or government agent or doctor here and there. They are structural, institutional failures on a massive scale – failures that have been deeply exacerbated by misplaced ‘trust’ in experts and authorities.

Queen’s Animal Defence has been criticized for demanding information about what happens to animals at Queen’s – as though it’s bad manners to question the ethics of the research industry, or to suggest that researchers, like all humans, are vulnerable to human frailties like professional myopia, arrogance, careerism and greed. Biomedical researchers carry out actions – depriving, terrifying, maiming and killing nonhuman animals – which, if you or I performed them, would be criminal acts. It is astonishing that they think they should be able to carry out such actions free from ‘awkward questions’ or the need to justify their actions to concerned members of the public.

We must have transparency, not just in terms of information about how and why animals are used in research, but in terms of the institutions that govern research priorities, practices and evaluation. Unfortunately, the biomedical research industry is not particularly vulnerable to direct consumer pressure, since it is funded primarily by research grants from governments. (Whereas in other animal use industries, such as food and fashion, the release of information can indeed support direct consumer action. For example, a private member’s bill currently before Parliament would, amongst other things, require labelling of cat and dog fur on clothing. Canadians purchase it unwittingly as generic fur trim, or even ‘faux fur’. Predictably, the industry is fighting this effort to provide consumer information. The call to install webcams in all slaughterhouses and farms is similarly opposed by industry. They know that the public would be outraged by ‘standard industry practices’.)

What we need in order to protect animals used in the research industry is transparency and public oversight concerning the governance of research, so that we can hold to account institutions using public monies, and elected representatives making decisions on our behalf. Instead of the utterly compromised CCAC, we need a public statutory body that isn’t populated by researchers, but rather by representatives of the public interest, and advocates for animals – people who will scrutinize and question practices rather than collude with them. And as members of the Queen’s Community we can continue to pressure the University to take responsibility for its research, rather than hiding behind the CCAC. There is no institutional impediment to Queen’s implementing its own procedures for transparency and public accountability about its use of animals. And there is need for Queen’s to wait until the Information and Privacy Commissioner compels them to release information before going ahead and doing so.

Today is Freedom of Information Day, and we are still waiting for Queen’s to do the right thing.