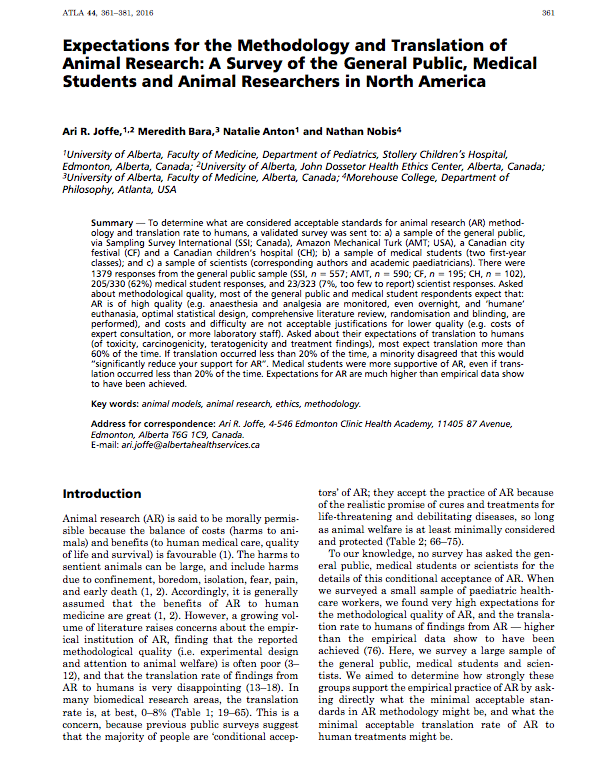 A new research study published in ALTA underlines the stark gap between expectations and reality when it comes to animal research. The study surveyed members of the public, medical students and researchers, and found that overall their expectations of human health benefits, of animal welfare measures, and of methodological rigour vastly exceed the empirical reality of animal research (AR). For example, on the expectation of translation of AR to human health benefit, 86% of the members of the public surveyed thought “it was ‘often true’ that a treatment discovered through the use of AR leads to direct or indirect benefits for humans”, despite the reality that the actual translation rate is 0-5%.

The researchers note that “the general public and medical student expectations of the methodology and translation of AR are far higher than the empirical data show to have been achieved: there is a disconnect between these expectations and the empirical reality of AR”. This dramatic discrepancy presents an important opportunity for animal advocates. As the researchers say: “if the general public were better informed, then they would likely withdraw their conditional support for AR, or at least seriously re-consider such support.”

You can read the full study on Academia.edu (open access).

It builds on earlier research published in BMC Medical Ethics (“Expectations for methodology and translation of animal research: a survey of health care workers”, 2015, 16:29).