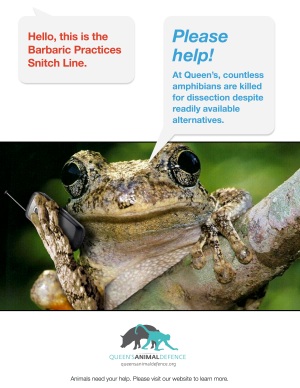 In QAD’s latest poster series, animals contact the ‘barbaric practices snitch line’ to speak out about the terrible things that happen to them in the biomedical labs at Queen’s.

Generally, when people talk about ‘cruel’ or ‘barbaric’ practices inflicted on animals, they are thinking in terms of actions that reflect a deviant individual personality (as in sadistic acts of torture), or practices of foreign or minority cultures (such as cockfighting). In Canadian law animal cruelty is defined in a way that exempts “generally accepted” cultural and economic practices. This means that animal farmers, trappers, slaughterhouse workers, scientific researchers and countless others can harm animals in horrific ways, while enjoying complete legal impunity, because their actions are classified as “generally accepted’ instances of animal use. If I, as an ordinary individual, sever a cat’s spinal cord to render her lame, or strap a monkey in restraints and deny her water to make her work for me, or deliberately induce bleeding in a hemophiliac dog, I am guilty of a crime. If a Queen’s researcher does these things, it’s considered a generally accepted scientific practice, or business as usual.

The goal of the barbaric practices poster series is to redirect the language of barbarism/cruelty away from minority practices, and aim it where it belongs, at routine, institutionalized violence against animals.

Queen’s is officially committed to the 3 ‘R’s, which includes reducing and replacing animals used in research with alternative methods, and yet the numbers of animals used continues to increase. The University refuses to release any information which would allow members of the Queen’s community, and the broader public, to monitor University practices, or challenge its policies governing animal research.

Please convey your concerns to the Office of the Vice-Principal, Research: research@queensu.ca

QAD is calling for:

The entire poster series, starting on January 2017 throughout the campus: 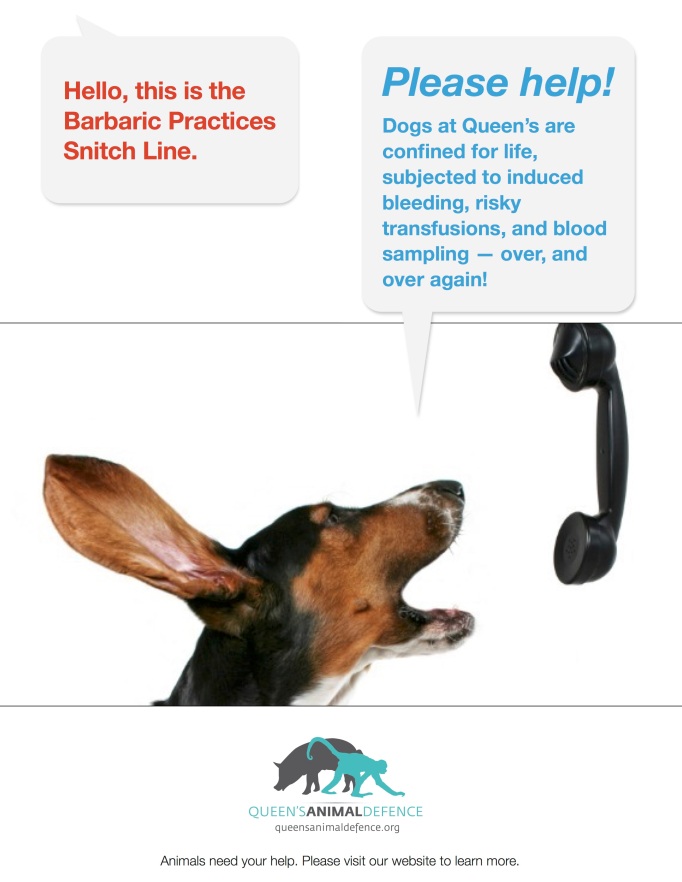