This is a breaking news for the animal rights movement, as the Nonhuman Rights Project issued the following press release this afternoon:

Under the law of New York State, only a “legal person” may have an order to show cause and writ of habeas corpus issued in his or her behalf. The Court has therefore implicitly determined that Hercules and Leo are “persons.”

A common law writ of habeas corpus involves a two-step process. First, a Justice issues the order to show cause and a writ of habeas corpus, which the Nonhuman Rights Project then serves on Stony Brook University. The writ requires Stony Brook University, represented by the Attorney General of New York, to appear in court and provide a legally sufficient reason for detaining Hercules and Leo. The Court has scheduled that hearing for May 6, 2015, though it may be moved to a later day in May.

The NhRP has asked that Hercules and Leo be freed and released into the care of Save the Chimps, a sanctuary in Ft. Pierce, Florida. There they will spend the rest of their lives primarily on one of 13 artificial islands on a large lake in Ft. Pierce, Florida along with 250 other chimpanzees in an environment as close to that of their natural home in Africa as can be found in North America. In the second step of the process, the Court will determine whether the reason given by Stony Brook is legally sufficient, or whether Hercules and Leo should be freed.

Hercules and Leo’s suit was originally filed in the Supreme Court of Suffolk County in December, 2013. A Justice of that Court refused to issue the requested writ of habeas corpus, and the Appellate Division, Second Department, dismissed the appeal on the ground that the NhRP lacked the right to appeal.

In the belief that both courts erred, the Nonhuman Rights Project respectfully re-filed its petition for an order to show cause and writ of habeas corpus on behalf of Hercules and Leo in March, 2015, in the New York County Supreme Court in Manhattan, which led to today’s decision.

In two similar cases on behalf of two other chimpanzees, Tommy and Kiko, the Nonhuman Rights Project has filed Motions for Leave to Appeal to New York’s highest court, the Court of Appeals. Decisions in both cases are pending. 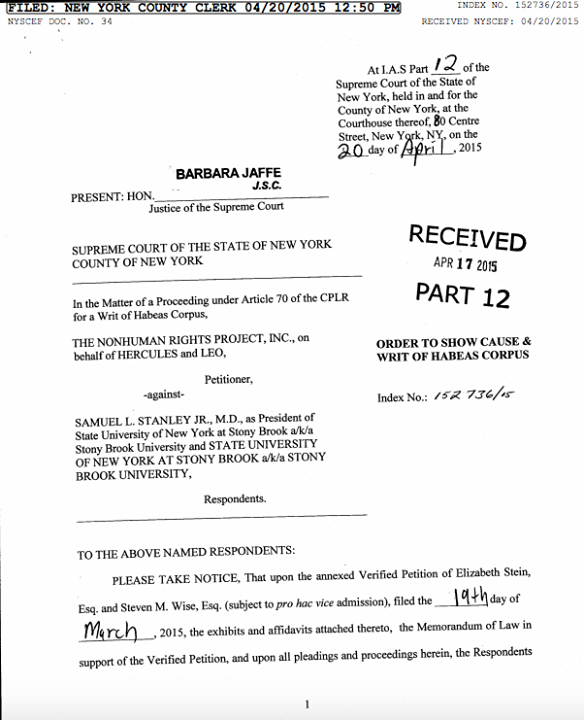