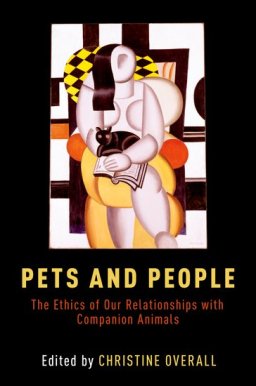 March 2017 sees the release of a new and important collection of papers in animal ethics: Pets and People: The Ethics of Our Relationships with Companion Animals. The book, which is available in paperback, hardback and eBook format from Oxford University Press, is edited by Christine Overall, a Professor Emerita of Philosophy at Queen’s University and a member of the Department of Philosophy’s APPLE (Animals in Politics, Philosophy, Law and Ethics) research group.

Animal ethics is generating growing interest both within academia and outside it. This book focuses on ethical issues connected to animals who play an extremely important role in human lives: companion animals (“pets”), with a special emphasis on dogs and cats, the animals most often chosen as pets. Companion animals are both vulnerable to and dependent upon us. What responsibilities do we owe to them, especially since we have the power and authority to make literal life-and-death decisions about them? What kinds of relationships should we have with our companion animals? And what might we learn from cats and dogs about the nature and limits of our own morality?

For more information, or to purchase the book, see the Oxford University Press website.